What Could Be Done To Prevent Salsa Conflict

You’ve seen notices like these that come in within a day or two of each other:

Next you hear questions and comments like the following dancing off the tongue or keyboard of a salsero or two:   “Why can’t these !?x!* promoters work together and have one event instead of dividing the community by having events at different Salsa venues on the same night?”  “Let’s get it together people.” 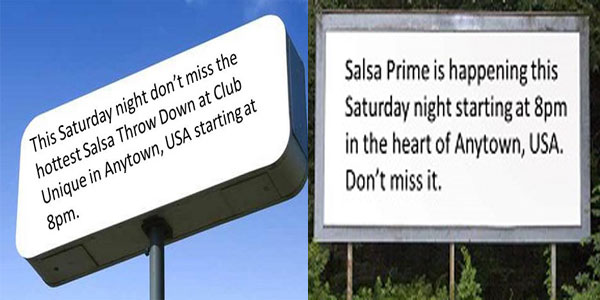 Why can’t these !?x!* promoters work together?

To answer that question, let’s look at the reasons why Salsa events conflict.

VENUE: It’s also happened where a promoter had to change the date of an announced event because the hotel where it is to be hosted changed the availability dates of their facility. The date change then bumps up against another event being held the same day in the same or a neighboring city.  Sometimes the owner of a venue says that they want a weekly event but they are only available on a day of the week that conflicts with another event across town. Promoters can’t always control these things.

Sometimes the venue owner determines the night of an event not the promoter.

SPITE: The blunt truth is that sometimes one promoter is in conflict with another promoter or owner and won’t attend something lead by them, so they’ll do their own thing elsewhere and don’t care that it conflicts with another event.

VARIETY: Depending on the market and size of a given city, sometimes promoters realize that not everyone likes attending Salsa events at an already scheduled Salsa venue. As a result, they’ll offer an alternative to serve the needs of the community.

MONEY: Let’s face it; promoters, instructors, and DJ’s do not do this stuff for free. They want to make money. They each have their own families and bills that they must consider. To be honest, each of us have the same responsibility to do what we feel is in our own financial best interest. We can’t fault them for that.

A NOTE ABOUT THE MONEY: I know from close observation that the

amount these people are paid compared to the number of hours some of them put into an event is far less than most of us are willing to accept in wages. The people who perform in these support roles in some markets do it initially from a passion for the dance. Reality is that they could make more money with those same hours working for minimum wage at your local burger joint.

Unity in the Community

After talking with leaders in several cities, I’ve learned that unity in the community is an ideal that doesn’t really work out anywhere….unless you’re in Smallville with a population of 26 people. Even then you’re likely to have a maverick in the group that wants to dance Merengue on 2. This doesn’t mean that promoters are all mutual enemies. It does mean that it is just the nature of things that in any collection of humans, there will always be a diversity of leaders and multiple community groups to serve the various needs. Examples include churches, sports leagues, and charity organizations like the Red Cross and the United Way. No one group will be able to meet all of the needs and variety of interests among the public they serve. Each leader and group strives to do what he/she/they feel to be best for its people and at the same time keep the role they have in the community. Yeah, I know. This sounds a lot like politicians. This then brings us to look at the pros and cons to having conflicting events in the Salsa community?

100% Unity in the community is an ideal that doesn’t really work out anywhere….unless you’re in Smallville with a population of 26 people 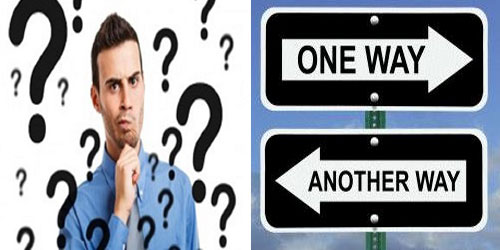 This can serve to divide the community physically and possibly in spirit. In smaller cities, attendance at one or both conflicting events may sometimes be too low to make people feel the event was a success. People checking out Salsa for the first time may be unimpressed at the quantity and quality of dancing that they see and be turned off to Salsa. Fewer dancers in attendance may mean fewer dances for the people who do show up. Owners suffer financial loss with lower attendance and may reconsider hosting Salsa events if they are not profitable. The credibility of the owner or promoter can take a hit when the advertisements all said this was going to be the biggest, bestest, baddest Salsa event around and the reality was anything but that. Promoters, DJ’s, and/or dancers may feel disappointed that they weren’t supported by those who attended the competing event. This disappointment can lead to animosity between promoters and their supporters. Those negative attitudes can leak to the public and discourage some dancers.

People love having choices since some will like the style of one DJ or Instructor better than another. One 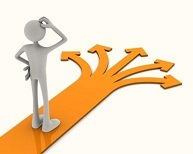 location may be a shorter commute for some dancers. Others may find an advantage for one venue because they feel it has a better floor, customer service, parking, security, etc. More Salsa events happening mean more promoters, instructors and DJ’s have an opportunity to use and develop their skills and possibly earn some cash. Events at multiple locations offer the chance to help grow our little village of happy feet by attracting more people to the Salsa community from the regulars at that venue or people near that venue. The popularity of one location may cause it to be over crowed at times and an alternative place to dance may be needed so everyone can enjoy dancing safely. The clientele at one location may be a demographic that doesn’t suit you as much as the crowd that offers their libations at a different Salsa venue.

No community can grow larger or stronger than the base of its leadership. If you’ve got more people wanting to dance on a given night than the current venue can safely hold, or more students wanting classes or private lessons than the current leadership can handle, then the capacity needs to increase. Multiplicity of leadership is a good thing. Regardless of how many leaders there are in a given Salsa community, dancers always vote with their feet. Headcount will dictate whether there will be conflicting events. These colliding events will screech to a halt if the dancers and spectators decide it must be so. I don’t worry about having multiple options because competition is always what drives promoters, DJ’s, and instructors, to produce better quality. Stop reading right now and raise your hand so I can see those of you who do NOT want better quality for the money you pay to attend these happenings.

No community can grow larger or stronger than the base of its leadership.

There are things that the various leaders and supporters among us can do to promote unity, strength and growth in the community:

Finally, if your area of the Salsa universe has conflicting events going on, then be thankful. There are plenty of people stuck out in podunk, backwoods, hick-town locations that would love to have enough people to have even one weekly event. Instead, they are stuck at home watching “Dancing With The Stars”….until they decide to become a promoter.

Talk Back:  Tell us what the Salsa community is like where you live. Are there conflicting events? How well does the community work together? What would make it better? What strategies have you tried that have helped increase the unity in your community? Click to send us your thoughts. 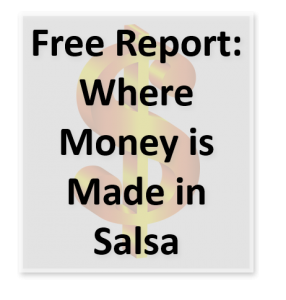 We’re always looking for writers and correspondents to share new articles, reviews, interviews, video, and photos. Gain exposure and backlinks to your sites.