For Men Only: Fear of Asking A Woman to Dance 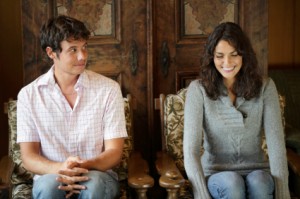 Know All The Counter-Moves Of This Dark Intimidation Factor

Salsa is not a spectator sport, yet I often go to events and see men and women both standing and watching lots of other people dance without dancing much themselves. Why is this? After quite a few blood samples and conversations with a number of men, the guys back at the lab identified what is called the DIF. That’s short for Dark Intimidation Force. This is that dark power that restrains men from extending their hand to invite a lady to dance. The DIF acts to lock a man’s jaw shut just when he’s tempted to ask a lady onto the dance floor. It paralyzes his feet when the music begins to make his toes tap to the rhythm of the music.

Armed with an understanding of the affects of this dark force, we sought to understand exactly how it works this evil. A thorough analysis of our test subjects revealed the following five elements of its grip on men.

The Intimidation Factor: Fear of Asking A Woman to Dance An icy voice whispers in a man’s ear that if he dares to muster up enough courage to extend his hand and ask a lady to dance that she’ll poke his eyes out or something worse. Most guys don’t fall for that one, but when the voice suggests how awkward or embarrassing it would be if she said “No”, well that tactic stops many a strong man where he stands.

Counter-move: Our researchers have discovered the counter-move for this one is to breathe deeply and think rationally that when a woman occasionally says “No” to your invitation there are a number of possible reasons that have nothing to do with you personally. The voice of the DIF suggests that if she does agree to dance with you, then for the next 6 minutes you are stuck.  You’ve just committed yourself to trying to get the steps right for the “basic” followed by the cross body spin or whatever that crazy move was called.

Counter-move: A lot of new salseros go through the phase where their newbie Salsa dance skills reduce their self-confidence.  They seem like a squirrel caught in the middle of a busy four lane highway.  Notice the guys that just move from one side of the dance floor or the bar to stand somewhere else for a few minutes.  Then they move again, but never actually dance.  The only way to get past that point is by practice.  The only way to gain the practice you need is by dancing. Remember that new ladies are often just as nervous about dancing as the new guys are.

Grip #3 Fear of Being Boring

Here’s the situation. You can tell the song playing is about to end. You try to resist the influence of the DIF by quickly scanning the area looking for your next dance partner. You spot some dancer on the floor with some guy who’s giving her multiple turns. They look fantastic. Alas, the vocals of doom remind you that you aren’t even close to being able to offer her that level of dance skill.  Thus, you immediately cross her off of your list of possible dance partners for the next song. Counter-move:  Yes, I can understand not asking someone to dance who is like 14 levels above you on the Salsa skill rating chart. However, because you estimate yourself to only be a 2 or 3 level dancer, doesn’t mean you should only dance with people who are the same as or lower than yourself.  In order for you to grow, you should also dance with people who are a bit further along than you are. Besides, dancers who are more advanced sometimes want a simple smooth dance and not a brain scrambling arm twister twice in a row.  Plus, when they are not only good dancers, but are also committed to helping the Salsa community to grow, then they are often happy to dance with new people. So, guys it never hurts to occasionally ask a more highly skilled dancer onto the floor. Sometimes you’ll get lucky….I mean you’ll get a dance.

Let’s admit it.  At the point of birth, in some sinister, underhanded way the Dark Intimidation Force injected each male with the “can’t admit that I’m incompetent at anything” virus. The affect kicks in right when a guy is standing near a potential lovely dance partner.  It causes him to notice that he is surrounded by dozens of other people who just might see him mess up what little he remembers from the class he just had. As a result, he doesn’t ask her to dance.

Counter-move:  Guys, I’m with you on this one.  However, it doesn’t look bad at all when you handle this learning situation with humility and patience. Keep in mind that it is a strong show of self-confidence to be able to laugh at yourself and admit your own mistakes publicly. Ladies find it attractive when a man is secure enough in himself to display the courage that it takes to learn how to dance Salsa. Don’t worry about it. Everyone makes mistakes while learning to dance Salsa. You just laugh a little, learn from it, and keep working on it. With consistent effort, you’ll increase the number of moves you know as well as how smoothly and on beat you make them happen.

Related Article: Why Guys Get Turned Down to Dance

She walks into the room.  Men and women alike turn to absorb the radiance of the dancer who just walked in.  She has everything just the way you like it and in the right proportions. Then you are calmly reminded that there’s not a snowballs chance down yonder that she’d give you a second look.  She’d certainly not dance with you. But even if you could talk to her, you remember what Will Smith said about dancing in “Hitch”. Just five seconds on the dance floor and whatever few cool points you had would instantly drop to zero!

Counter-move:  Our lab guys found out that many women will tell you that they wish they had more opportunities to dance. A stunning appearance doesn’t mean that they are not willing to dance with even you. Just don’t be weird. Self-confidence goes a long way in a lot of different parts of life.

The Dark Intimidation Force doesn’t have to retain it’s power over you and continue to cause a fear of asking a woman to dance. Understanding the elements of its grip on men has equipped us to break this restraining force so that both men and women can increase their enjoyment from dancing?  As you struggle to break free, remember that most women won’t ask you to dance, so the responsibility is mostly on us guys. The more you ask, the more you’ll practice and the better you’ll get. When you combine that practice with being consistent at taking classes, then the day will come for you like it did for me when a dancer will say that they can tell that you’re not fresh out of your first Salsa dance class.

Related Article: Ladies Only: How To Get More Dances

Talk Back:  Holla back and let us know if we hit the mark on this one.  What’s been your experience with the fear of asking a woman to dance?  Ladies, how can you tell when a guy is feeling the Intimidation Factor?   Let us know in the comments below.